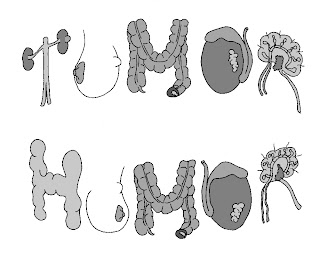 Tumor Humor is my performative gag cartoon series(1) about malignant neoplasms, a.k.a cancer. Yes, cancer. If that is offensive to you I gently suggest you stop reading this post and check out Hoorabies for Rabies, or Phun with Phagocytes for some pathology fun!

You can tell this is going to be a knee-slapper just by looking at the title, above. The T is two kidneys with their arterial connections. The kidney on the right has the neoplasm. The U's are breasts with lumps. The M is a colon with a pedunculated adenoma at its end. The colon image is particularly cheerful because adenomas are not cancer. On the other hand, we have no idea whether or not the tumors in the O's (formed by testes) or the R's  (lymph nodes) are malignant. Here are a of my favorites from this collection. 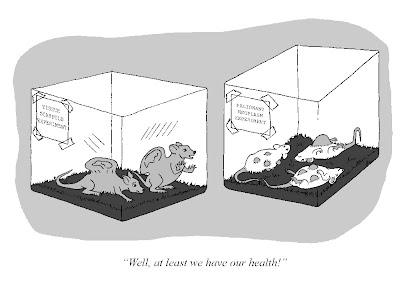 The hairless mice in the "tissue scaffold experiment" cage look over at the dead mice in the "malignant neoplasm experiment" cage. One of the mice says to the other, "Well, at least we have our health!" That's quite true. You can see by the tumors rising out of the bodies of the neoplasm mice that they were riddled with cancer and most likely died horrible deaths. On the other hand, the tissue scaffold mice are in perfect health. They just happen to have human ear shapes, grafted in cartilage, growing out of their backs. And no - the mice can't hear out of those "ears."

You might think the joke stops there: deformity being an ironic yet desirable trade-off to death. But the real joke is that it doesn't matter what state of health these animals are in, for they are doomed! Standard procedures in labs that test on animals is to kill all test subjects at the end of the experiment. This mouse has just said something funny because she is so naive! 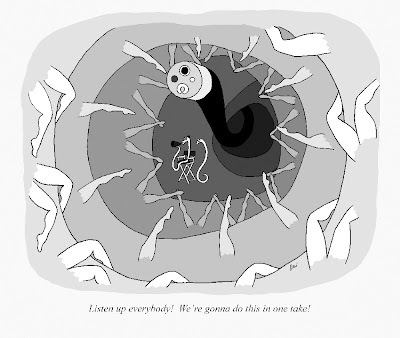 Here we have two pin worms and a colonoscope, up from the anus, to film the polyps growing in this particular colon. The pinworm wearing the beret, sitting in the director's chair, and holding the megaphone is shouting "Listen up everybody! We're gonna do this in one take!" to the little tumors sprouting out of the intestinal wall.

The main source of humor in this imagery relies on the understanding that the word "polyp" comes to us from the Latin polypous meaning "many footed." A polyp in medical terminology is a foot-like tumor. Here we see many footed polyps organized in symmetrical formation. Add to that a movie camera and a pinworm wearing the trappings of a 1930's film director and voila! The composition screams "Busby Berkeley!" the great musical director/choreographer responsible for films like Gold Diggers of 1933, 42nd Street, and The Gang's All Here.

The note of truth in this otherwise ridiculous scenario is that if polyps are found during a colonoscopic examination they are typically immediately removed and examined to determine if they are cancerous. "We're gonna do this in one take!" Indeed they are!

This particular cartoon is close to my heart because I made a film that was an homage to Busby Berkeley a few years ago(2).

1. For a more complete description of Pathology Laffs and its performative aspects, see PATHOLOGY LAFFS - PHUN WITH PHAGOCYTES.
2. See SUNSCREEN SERENADE.
Posted by Kriota Willberg at 10:04 AM

Kriota Willberg
Kriota Willberg uses comics, needlework, historical studies, bioethics, and her experiences from her career as a massage therapist and health science educator to explore body/science narratives. Combining this history with her background as an artist and educator, she has been creating comics and teaching artists about injury prevention through panels, workshops, and her book, Draw Stronger, from Uncivilized Books. Her other comics appear in: 4PANEL, SubCultures, and Awsome Possum 3, Comics 4 Choice, Strumpet 5; and Graphic Canon; as well as the journals Intima and Broken Pencil. Willberg is the inaugural Artist In Residence at the New York Academy of Medicine Library. She teaches graphic medicine at NYU's Department of Humanistic Medicine. Opinions (and "facts") hers alone. Contact her at Kriota(at)earthlink(dot)net.